How Much Oil Does Islamic State Have and Who Buys it?

Islamic State (Isis) is believed to receive $50 million (£33 million) per month from selling crude oil from numerous wells it controls in Syria and Iraq, with smugglers exploiting routes in Turkey and beyond which were first carved out during the United States sanctions on Saddam Hussein’s regime.

It is believed that oil sales remained the largest single source of income for the group and a key reason it had been able to maintain power over Iraq and Syria territories. Islamic State sells cut-price oil in order to curry favour with the powerful Sunni tribes in western Iraq and eastern Syria, and uses the excess cash to pay fighters and purchase weapons.

Turkey angrily denied that Islamic State was smuggling oil through its territory following evidence published by Russia that showed trucks entering the Turkish territory. However, there is little the country can do to interrupt smuggling routes which have been in operation for over two decades. Many of those inside Islamic State’s oil industry were former officials under Saddam Hussein and possess established networks and excellent connections.

According to Associated Press, US officials have been in talks with Turkey concerning energy infrastructure heading the other way, with extraction, refinement, transport and energy production equipment being smuggled into Islamic State-held areas of Syria. An official stated that IS management of oil fields was “increasingly sophisticated” and supported the group even as United States air strikes take out infrastructure and key figures. 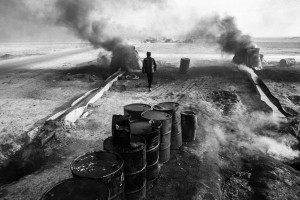 The report states the number of oil wells under Islamic State control in Syria is 253, with 161 of them operational. Running the wells were 1,107 workers and 275 engineers, it said. The report covered the month after Islamic State was offset from a major oilfield near Kirkuk, showing that even the backed by the United States assaults on Islamic State-held oil fields did not have a major impact on terrorist oil infrastructure.

Islamic State was able to step into an established oil industry in Syria when it started capturing territory in 2014. The biggest part of the wells were operated by the Royal Dutch Shell affiliate, Al-Furat Petroleum Company, and produced comparatively high-quality crude oil with a low concentration of sulphur and easy to process, according to 2015 report concerning IS oil industry. After oil was pumped to surface, it was either lightly refined on site in temporary, trailer refineries in order to be traded on the local market, or loaded into trucks and carried over the Turkish border. Turkish and Kurdish maintenance crews ride overland under heavy guard and work on refineries and wells in IS-held territory, according to Iraqi officials. Senior officials from Iraq’s northern-based oil firms have been employed by Islamic State.

A number of reports into IS oil industry including by the Guardian and Financial Times revealed how sophisticated the Islamic State oil smuggling operation is. The network has been uplifted regularly during the debate in the House of Commons in Britain over the increase in air strikes on Islamic State-held positions in Syria following the attacks in Paris.

Jeremy Corbyn, a Labour leader who opposes the action, demanded tougher restrictions on the sale and smuggling of Islamic State oil rather than military action, echoing calls from the United Nations on November 17, 2015 which urged Security Council to order that all trucks which carry oil from areas controlled by Islamic State are halted to hedge off the flow of illegal oil.

Oil Industry » How Much Oil Does Islamic State Have and Who Buys it?