Scientists Drill Beneath Crust of Earth For First Time

We have never drilled into the mantle located beneath Earth’s crust. In December 2015, however, scientists were hoping to change all that.
A drilling ship named the JOIDES Resolution (Joint Oceanographic Institutions for Deep Earth Sampling) was sent to the Atlantis Bank on South West Indian Ridge of Indian Ocean. There, the ship will try to drill 0.9 miles (1.5 km) into Earth’s crust in a campaign famous as SloMo (Slow Spreading Ridge Moho project).
The mission, co-led by Henry Dick from Woods Hole Oceanographic Institution and Prof. Chris Macleod from Cardiff University, is the precursor to a more grandiose task. In the 2020s, the same team plans to use another drilling vessel, the Chikyu, to become the pioneer in breaking into Earth’s mantle. 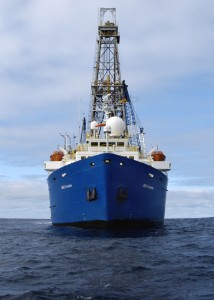 According to the oceanographer at Scripps Institution of Oceanography in La Jolla CA, Walter Munk, “We live on this Earth and we ought to know something about what happens beneath us.” Munk led a previous, unsuccessful expedition to drill into the mantle famous as Project Mohole, 1961. Dick was part of a failed attempt in 1997. However, there are high hopes for the new project.

SloMo is being run by IODP (International Ocean Discovery Program) as part of Expedition 360, and is heading to this particular area because the mantle is believed to have swelled up under the crust, making it much more accessible. Generally, the mantle is below Moho, a feature at crust-mantle boundary. Here it is above, at depths of up to 1.6 miles (2.5 kilometers) that are reachable, while Moho may be lower, but still accessible, at nearly 3.1 to 3.4 miles (5 to 5.5 kilometers) in comparison to tens of kilometers below land.

During the initial expedition, known as Indian Ridge Moho Expedition, the specialized ship’s drill will go only into Earth’s crust and try to return a sample. Expeditions in the next years, as early as 2018 with no firm dates set, will try to go deeper.

One of the main goals of the initial expedition will be to study the serpentinization levels at these depths, rock formed by an active source of heat like magma from deeper within the Earth, which is linked to abundance of microbes. Professor MacLeod told BBC News that if there was far more serpentinite down there, goodness knew how much of that had microbes in it.
If the initial phase of SloMo (run until January 30) is successful, it could be a huge step towards the dream of returning a sample from the mysterious mantle of the Earth.