Cutting-Edge Material Absorbs Its Own Weight in 33 Times

Scientists in Australia created an amazing new material which could prove vital in cases of future ecological disasters like the 2010 BP oil spill. Since experts call future oil spills ‘unavoidable’, such a new invention could not have come soon enough.
The new material is named a boron nitride nanosheet. It acts like a sponge. Scientist Dr.Weiwei Lei from Deakins University’s IFM (Institute for Frontier Materials) said that the nanosheet was made up of flakes that are only several nanometers thick (one billionth of a meter), with tiny holes that “can increase its surface area per gram to effectively the size of 5.5 tennis courts”.
The super-sponge using boron nitride powder – “white graphite” – was created by the research team, including scientists from Missouri University of Science & Technology and Drexel University, Philadelphia. This was invented in 2013, but the tricky part was transforming the powder into sponge-like material. Two years later, the team succeeded in breaking the white graphite down into atomically thin sheets, then used to make a sponge. 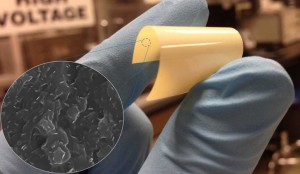 Dr.Lei said that the pores in the nanosheets provided the surface area to absorb organic solvents and oils up to 33 times its own weight. The nanosheets are great in every way: they don’t burn, they can withstand flame, and in addition to many other things, they can be used in transparent and flexible electrical and heat insulation. The material is ready to start trials. “Oil spills are a global problem and wreak havoc on our aquatic ecosystems, not to mention cost billions of dollars in damage.

Everyone remembers the Gulf Coast disaster, but here in Australia they are a regular problem, and not just in our waters. Oil spills from trucks and other vehicles can close freeways for an entire day, again amounting to large economic losses.” Dr.Chen pointed out that contemporary methods of cleaning up oil spills were unsophisticated and inefficient, taking too long, and causing ongoing, expensive damage. Materials that are used to clean up oil spills can frequently do more harm than good. This is why the new revolutionary material is of great importance. Dr.Chen said they were so excited to have finally got to that stage after two years of trying to work out how to turn what they knew was “a good material into something that could be practically used”.