According to an official from SPIMEX (St.Petersburg International Mercantile Exchange), Russia wants to see its own domestic oil blends compete with WTI and Brent as primary global crude benchmarks.
SPIMEX advisor Segey Kvartalnov said their goal was to take a place among major indicators. The pricing for most of their oil exports, which as well determined their budget, was currently in the hands of their partners. He added that it was of great importance “to set a more relevant mechanism for determining a fair price for Russian crude”.

According to Kvartalnov, the Russian futures market could initially use the US dollar for its operations, but could possibly switch to trading in other currencies, as well as Russian rubles.

He explained that around 70% of the oil contracts in the 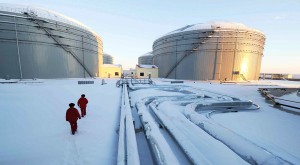 world were currently based on the Brent benchmark.

“The volume of Urals and ESPO Russian oil blends on the international market is twice the total volume of oil supplied from BFOE, Oman and Dubai.”

“The price of Russian oil should stop being determined by Brent or Dubai.”
In June 2015, Igor Sechin – the head of the biggest oil firm in Russia, Rosneft – called for increased efforts in order to standardize domestic oil blends.

Crude transported through the ESPO pipeline, and Russian crude from Urals region, is currently trading cheaper in comparison to Brent blend because of lack of delivery guarantees and transparent pricing mechanism.
To be acknowledged as a benchmark on the global market, Russian crude has to meet the following three requirements:

Cutting-Edge Material Absorbs Its Own Weight in 33 Times
North Korea - Next Energy Superpower?