Oil Falls Below $35 on Rising Stocks

For the first time since 2004, oil prices slided below $35 per barrel on January 6, 2016 tumbling over 5% as the row between Iran and Saudi Arabia made any cooperation between the major oil exporters on cutting output more unlikely.

A sharp growth in gasoline stocks in the US reinforced the image of a market which is flooded with oil and refined products. The international anger over the execution of a Shi’ite cleric in Saudi Arabia ended speculation that the members of OPEC might agree to production cuts in order to lift prices. According to the chief market analyst at CMC Markets, Michael Hewson, there were rising stockpiles. The tension between Saudi Arabia and Iran made any deal on production improbable.

Evidence of slowing economic growth in India and China has meanwhile increased fears that even strong demand elsewhere might not be enough to overcome the excess crude which is the result from almost record production in 2015. Benchmark Brent futures have been traded at $34.48 a barrel at 1606 GMT, which is down $1.94 on the day, at their lowest level since July 2004. The price is on track for its biggest one-day percentage drop in nearly 5 weeks. 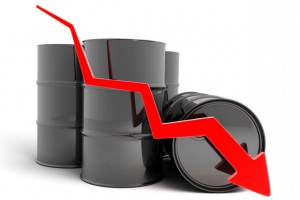 US crude futures were down $1.48 at $34.49 a barrel after slipping almost 80 cents the previous day. Oil has slumped from $115 in June 2014 as the United States’ shale oil has flooded the market. Falling prices prompted some producers to pump harder to compensate for the low revenues and to keep their market share.

Adding to the oversupply, Iranian exports are expected to increase this year as Western sanctions over Tehran’s nuclear program are lifted.Hewson also said that shale oil production and growing capacity from countries, such as Russia who need to protect their revenue, combined with the expectations of further supply from Iran, meant actual production and future production expectations were rising.

However, senior oil official from Iran said that the country could moderate its oil export once sanctions were lifted to avoid exposing prices to further pressure. Feeding into the weak market sentiment is also a survey that showed the services sector of China expanded at its slowest pace in seventeen months in December, as a result of the weak factory data which also knocked global markets.The Chinese People’s Bank set a weaker midpoint for the yuan, suggesting concerns that the economy of the largest energy consumer in the world could be in worse shape than suspected.

Meanwhile, US gasoline stockpiles have risen by 10.6 mill barrels during the first week of January. According to Energy Information Administration data, this was the biggest build since 1993.Investors neglected an unexpected fall in crude stocks and instead focused on the massive oil products’ oversupply, with distillates and gasoline inventories gaining. John Kilduff at Again Capital said that the build in gasoline was “more spectacular and crushing to the market” than the crude oil drawdown. Gasoline was the only source of power within the complex, and that looked to have ended.

How Much Oil Does Islamic State Have and Who Buys it?